Traditional Long-term care insurance sales have been trending down since the turn of the century despite the favorable demographics of an aging population who needs to plan. There are many theories about why this is the case, but many point to the fact that the number of rate increases on in-force policies has led to financial advisors and their clients becoming hesitant to buy traditional LTC Insurance because of the possibility of these big increases.

If you are a consumer interested in planning for long-term care, it would seem you have reason to be nervous. First, many advisors are telling clients to expect rate increases on LTC purchased - a way of saying past performance is an indicator of future performance.  Similarly, if you are a client deciding to still go ahead and complete an application, the state required personal worksheet will list that carriers rate increase history implying that there may be some correlation between the past rate increase history of carriers and the pricing of the current product.

It would seem someone who wants to buy coverage has two choices - apply for a hybrid life/ltc plan with guaranteed premiums (even if there isn't a need for life insurance) or buy traditional coverage at a lower premium and benefit amount and "budget" for anticipated rate increases based on past history, waiting for the inevitable rate hike.

Forget that fear. LTC Insurance purchasers should be comfortable that today's plans are going to remain fairly stable over the lifetime of premium payment.  The reasons is the efforts of the two groups responsible for not repeating the pricing mistakes of the past - the carrier actuaries and the regulators.  Consumers and advisors should understand how a combination of new pricing methods and smart regulations keeps plan premiums stable.

Here is a brief overview of how both groups have tackled the issue:

How have pricing actuaries changed their approach to pricing LTC plans?  It comes down to 5 changes.

Want to dig deeper on the actuary perspective - check out this SOA pricing project PDF. 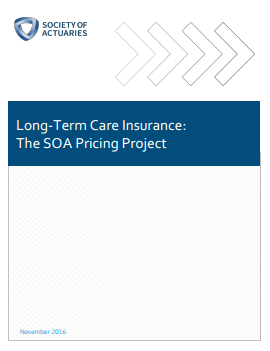 State insurance regulators have also tried to stop pricing problems on new LTC business by adopting rate stability regulation in the early part of the 2000's.  Here are the ways in which the NAIC long-term care insurance model regulation, which is similar to the law in the vast majority of states, helps keep new premiums stable:

The fact is the vast majority of rate increases have happened on blocks of business written prior to rate stability regulation.  If you'd like to learn more, please listed to a recent webinar we did on this topic with Scott Olson of www.ltcshop.com.  You can find a link to the call here.