The decision to purchase long-term care insurance can be a difficult one. The very nature of the product – helping protect a version of “you” who may need care 30 or 40 years in the future is hard to wrap our brains around. The vast majority of people seeking coverage on their own are those who have had personal experiences with a loved one needing and paying for care.

So talking to clients about the need to consider this coverage while they’re in their 40s and 50s takes some understanding of why buying earlier is a smart move. Traditionally, there have been three reasons why “buy now” makes sense.

Now there is a new reason that people may want to consider buying early, and it has to do with new public long-term care financing programs that are being proposed in several states. Many of the plans are based on the Washington Cares Fund, a publicly financed LTC Insurance benefit in Washington State.

The Washington Cares fund provides a LTC benefit for Washington residents of $100 per day for up to 365 days, or a total benefit of $36,500. For people who cannot afford or won’t health quality for private long-term care insurance, this fund can provide helpful care at home and support financing the professional home caregiver industry.

How is the state paying for the program?   Washington state is implementing a .58% payroll tax on employees. As an example, a tech worker in Seattle who makes $200,000 would pay $1,160 in taxes each year for the plan. And they will have to wait several years before they can access any benefits.

What about people who own LTC Insurance? Washington legislatures decided that people who currently owned private LTC Insurance could exempt out of the payroll tax. They set a deadline for proving exemption last year, and the result was a rush of people to purchase LTC Insurance through their employers or financial advisors.  By the end of 2021, almost half a million Washington state residents were approved to be exempted from the .58 percent payroll tax.

The sales growth in Washington impacted the entire LTC Insurance industry. For instance, here is how LTC Insurance grew greatly during 2022 (Source: LIMRA): 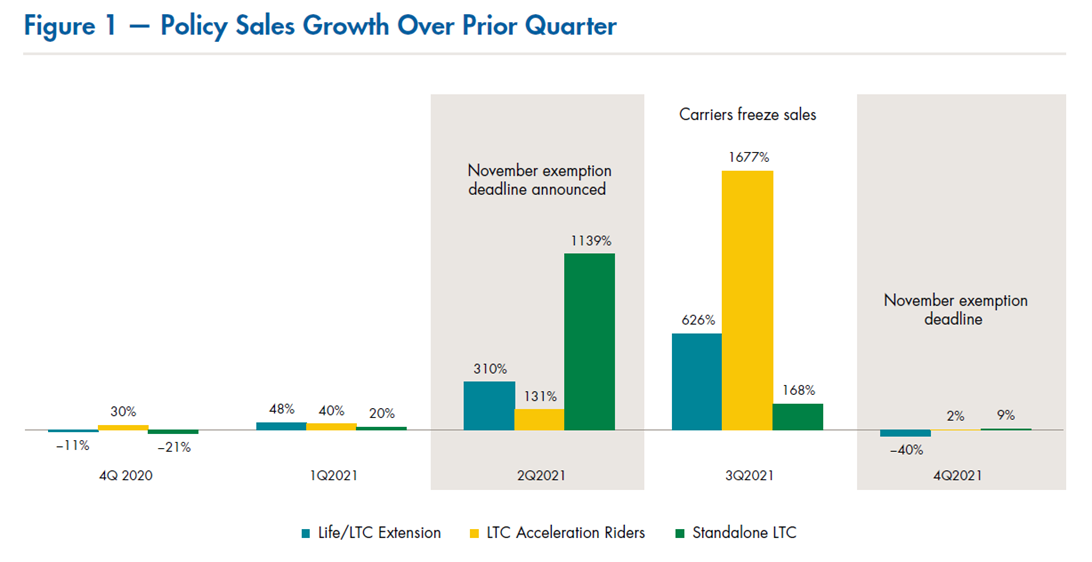 Unfortunately, there was a significant number of people who were unable to get private long-term care insurance in time to become exempt. A primary reason is that insurance carriers were concerned about the amount of business they were receiving and that people who bought coverage would drop it after they received the tax exemption. This led many carriers to simply suspend new sales in Washington state until after the 11/1/21 deadline to secure coverage.

Many more people in Washington state received an exemption than the state anticipated. The result could be less funds for the program and future increases in the payroll tax percentage is needed.  So those who missed out could face higher costs in the future.

Now, several other states are considering a program like Washington, including large population states like New York, California and Illinois. Below is a map of the states considering legislation. 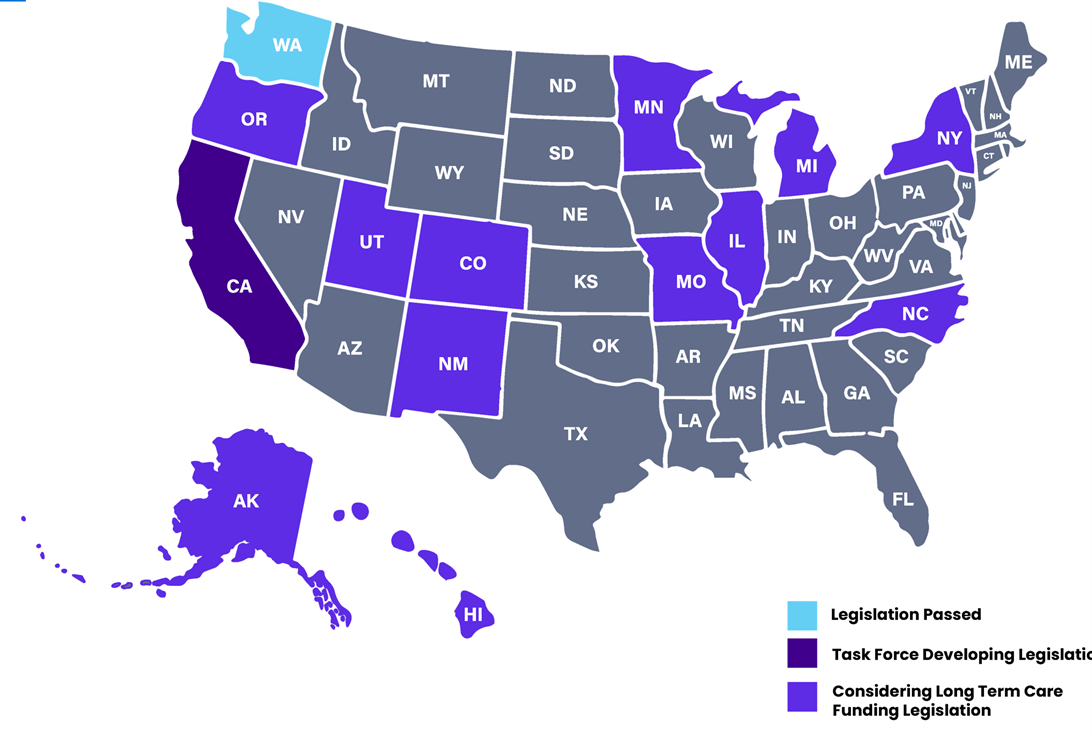 Many of the proposed programs (like Washington) could also include a payroll tax opt-out for people who own private long-term care insurance. However, it is not certain that states who adopt plans will allow for an opt-out period to buy coverage. People in states where legislation is contemplated may want to secure coverage now.

Of course, LTC should be contemplated for any client by an advisor engaged in comprehensive planning. Existing LTC plans should be reviewed on a periodic basis as well to see how they are performing and keeping up with the increasing cost of care.

Buying younger makes sense for several reasons – lower premiums, less chance of being declined for coverage, and feeling more secure financially. All of these are reason alone to consider buying LTC Insurance. Avoiding a potential future payroll tax is another.