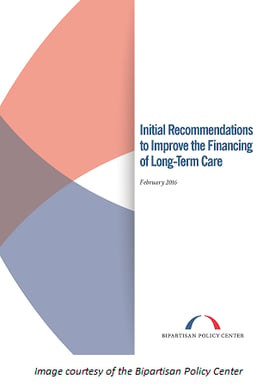 Four former top government officials (two Democrats and two Republicans) have proposed a new plan aimed at improving the nation’s system for financing Long-Term Care (LTC). We believe these officials have taken a major step in raising the profile of the critical issue of Long-Term Care financing, which will impact the LTC group marketplace. The group recommends changes in two key areas:

The plan was developed by the Bipartisan Policy Center, a Washington-based think tank that tries to develop policy solutions that cross party lines. The LTC report was released by Democrats Tom Daschle, a former Senate Majority leader, and Alice Rivlin, former director of the Congressional Budget Office and the Office and Management and Budget; and Republicans Bill Frist, also a former Senate majority leader, and Tommy Thompson, a former Wisconsin Governor and U.S. Secretary of Health and Human Services.

BPC Private LTC Insurance Recommendations (with my comments in italics):

So, will these recommendations ever move forward and lead to change in the marketplace? We’ll see (it should take time like everything else in Washington D.C.), but the good news here is that issue of LTC financing is front and center. We’ll keep you apprised of any developments with having to do with this report and the Bipartisan Policy Center.